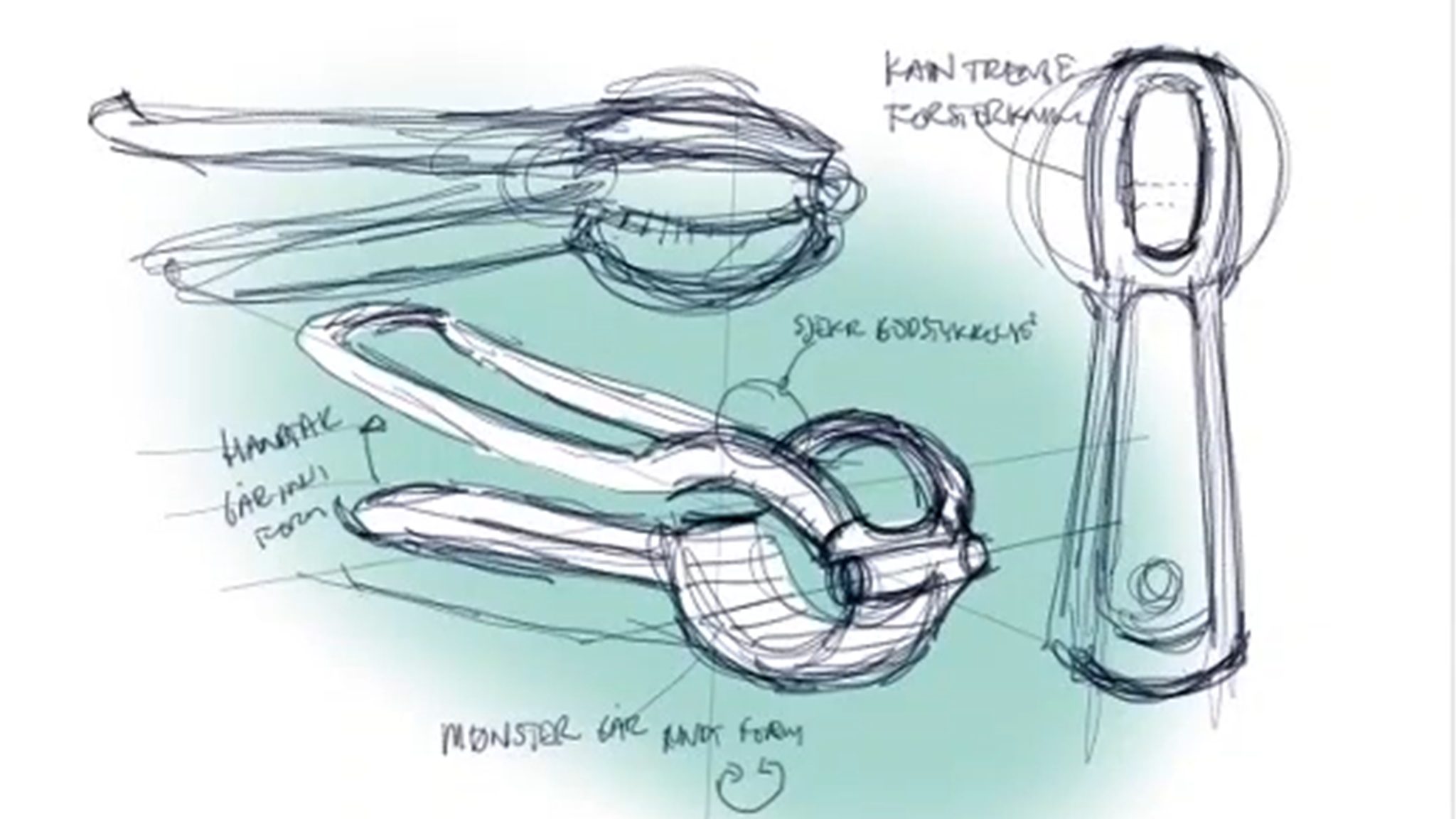 From design to print. Our story begins when Lars Haaland, a PLM Group employee, got the idea to make a nutcracker. No, not the ballet dance everyone knew, which had certainly amazed us perhaps even more, but a nutcracker tool.

Christmas was approaching and all the shops started selling different kinds of nuts. And these walnuts are usually only seen in their shells at Christmas, which made Lars wonder if he could design a nutcracker himself with SOLIDWORKS, which he uses every day.

At work, he told his colleagues about his idea, and they got excited too.

The initial idea expanded a little, and eventually they decided to make a real nutcracker from design to print. Why not, they had all the tools available they needed.

When the managers gave the green light, the team started the project. Lars was in charge of the design itself, Eirin S. Holmstrøm did simulation studies to prove the strength of the tool and finally Stiian Mork was in charge of 3D printing.

All communication of the team was done through the 3DEXPERIENCE platform, which also gave them immediate access to the design and simulation solutions they were using. Through the platform, project files were available in real time to all team members, which was convenient when they were working from different countries.

From design to print

It all started in the 3DEXPERIENCE platform where Lars was able to discuss with the team about the ideas how the product should look like and move from idea to concept.

Lars built the Nutcracker 3D CAD model in SOLIDWORKS connected with the platform. During the design process it was easy to him to ask feedback via platform from the team while everyone had access to the design.

Although it was possible to work only from the 3DEXPERIENCE platform Lars made smooth transition from platform to SOLIDWORKS and finished his design work there.

Watch the video below on how Lars made the design of the Nutcracker:

The part was then ready for printing or was it?

Once Lars had the model ready for printing, Eirin took it from there and did some strength tests for the design. First Eirin added the 3D walnut between the handles and fixed it so it´s not allowed to move during the simulation.

The material was already defined for the model, so it was transferred to the study. Using Simulation, Eirin simulated forces to find out what it takes to crack a nut.

Watch the video below on which studies Eirin used in Simulation:

After the tests, the model evolved into its final form – a fully functional nutcracker.

How was the part 3D-printed? What file formats Stiian used and what setups he needed to do? And what happened, did everything go as they had planned?

And the big question on everyone’s mind is probably, were they able to crack the nuts or – did the nutcracker itself crack?

The story is to be continued in our next blogpost.

Boost your team collaboration with the 3DEXPERIENCE cloud platform

Good products are often designed and executed by a group of experts. This case was no exception. With the right tools and knowledge innovations are made and everything is possible. Want to learn more? Reach out our team

We have told you before about the trials of the team trying to design and produce their very own nutcracker. Through hardships and redesigns, Lars Haaland (In some circles known as the 3DExperience...

END_OF_DOCUMENT_TOKEN_TO_BE_REPLACED

Sometimes you only need fast, reliable and hassle-free concept modeling. In these cases, there is now a new material available from Markforged. The Precise PLA is the latest material release and comes...

END_OF_DOCUMENT_TOKEN_TO_BE_REPLACED

Following the success with the peel 1 and peel 2 scanners, Creaform’s brand peel 3D releases the professional-grade peel 3 scanner, with a resolution 2.5 times better than the peel 2, plus a bunch of ...