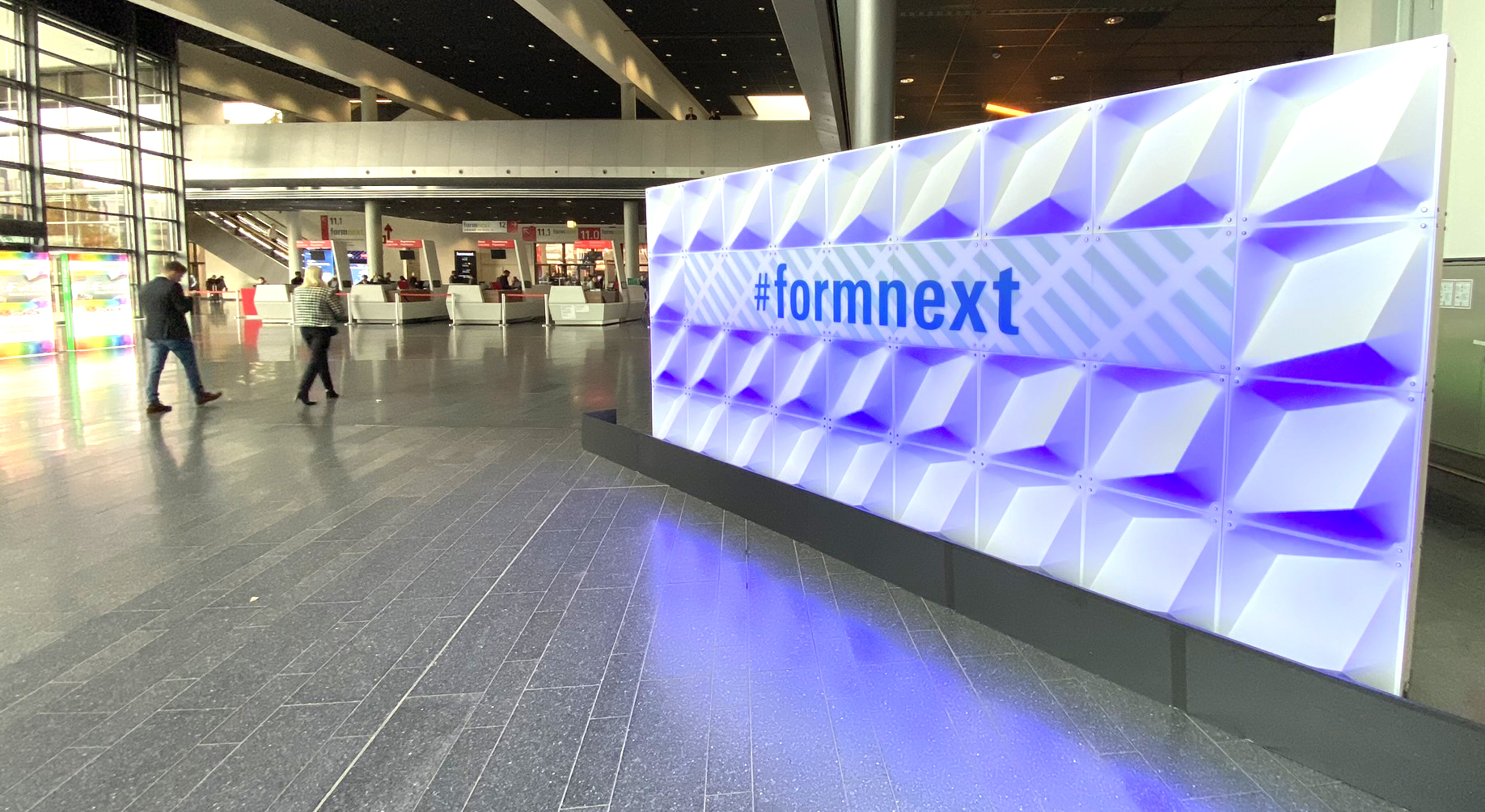 There is no doubt that the Frankfurt based 3D printing trade show Formnext is the champion of 3D printing exhibitions. When we first visited the show back in its first year, 2015, exhibitors fit in one hall. Four years on, Formnext is housed in four jam packed halls, boasting 852 exhibitors and 34,000 visitors.

Of the countless news we picked up during our days at the trade show, both from partners, and other companies, there are a few trends that we’d like to share. Here’s our report for this year’s Formnext trade show.

The interest in metal 3D printing doesn’t seem to decline. Especially for larger build volumes and entry-level solutions – a clear sign that metal printing is moving outside its core target groups. You can now get a metal printer for under 100,000 euros, which is making metal printing more accessible to companies that may want to dip their toes, especially SMEs. There were at least ten new metal systems on display at Formnext, with a total of 185 companies focusing on metal, so competition is definitely on the rise. That’s a good thing for users, as prices will eventually decrease, both for systems and materials.
Another example of the spike in metal printing is the growing number of metal material providers. Superalloys, bespoke materials and even copper for heat dissipation solutions, were some of the hottest metal material topics at the German trade show.

Even though 3D printing started out as a prototyping method, the fastest growing application area today is end-use parts. This trend puts a lot of demand not only on materials, the 3D printing process and quality control, but also on manageable and efficient technologies for postprocessing. The area of postprocessing covers everything once a print job is done; parts handling, depowdering, dyeing, parts inspection and more. At this year’s Formnext, we saw countless examples of postprocessing solutions – proof that 3D printing is maturing rapidly and ready to take on larger print volumes efficiently.
Some of the players you should keep an eye on are DyeMansion, Pulvermeister, Clariant and AM-FLOW. DyeMansion is one of the brightest shining stars in postprocessing. Their solutions portfolio covers everything from depowdering to dyeing and pelting – and everything is developed for larger runs of end-use parts printed with SLS or MJF.
The growing number of players in postprocessing means users can much more easily create 3D printing eco systems, connecting software, services, printers, materials and finishing solutions for a more frictionless production workflow. 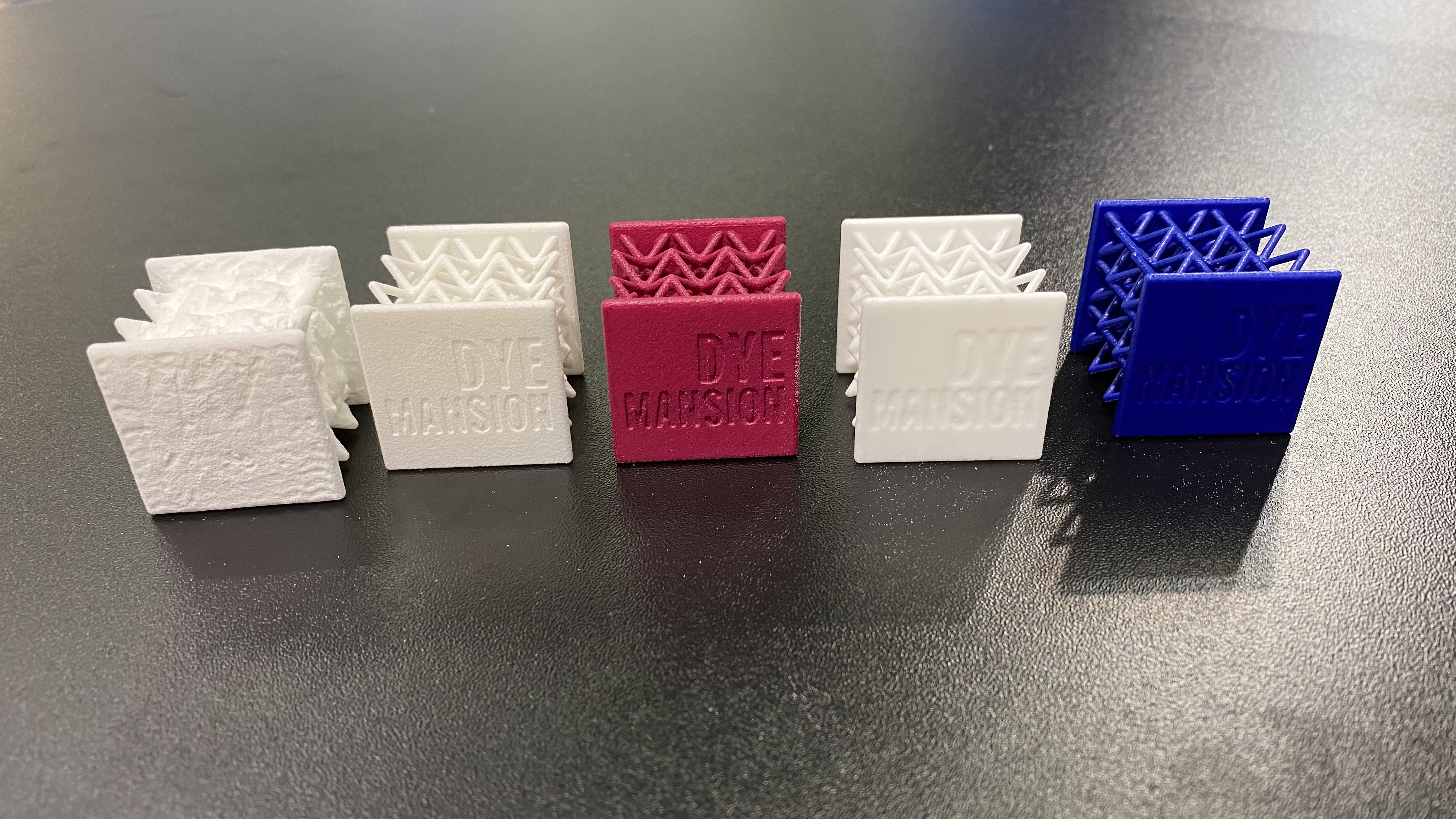 From depowdering to dyeing – DyeMansion has several postprocessing solutions for SLS and MJF printed parts.

Markforged, known for their unique carbon fiber reinforcement technology, announced a new partnership with MSC Software Corporation. The partnership aims to deliver process simulation, performance modeling and material analysis tools to customers, so they can better understand the performance of their 3D printed parts. This is good news for anyone using Markforged printers for functional testing, jigs & fixtures or end-use parts, adding a much needed quality control method that can be used directly in the Markforged ecosystem.
Among other Markforged news is the new Turbo mode for the industrial polymer printer X7 . The “twice as fast” mode only applies when you print with Onyx, but it is still a nice feature when you want fast prototypes for same day delivery. 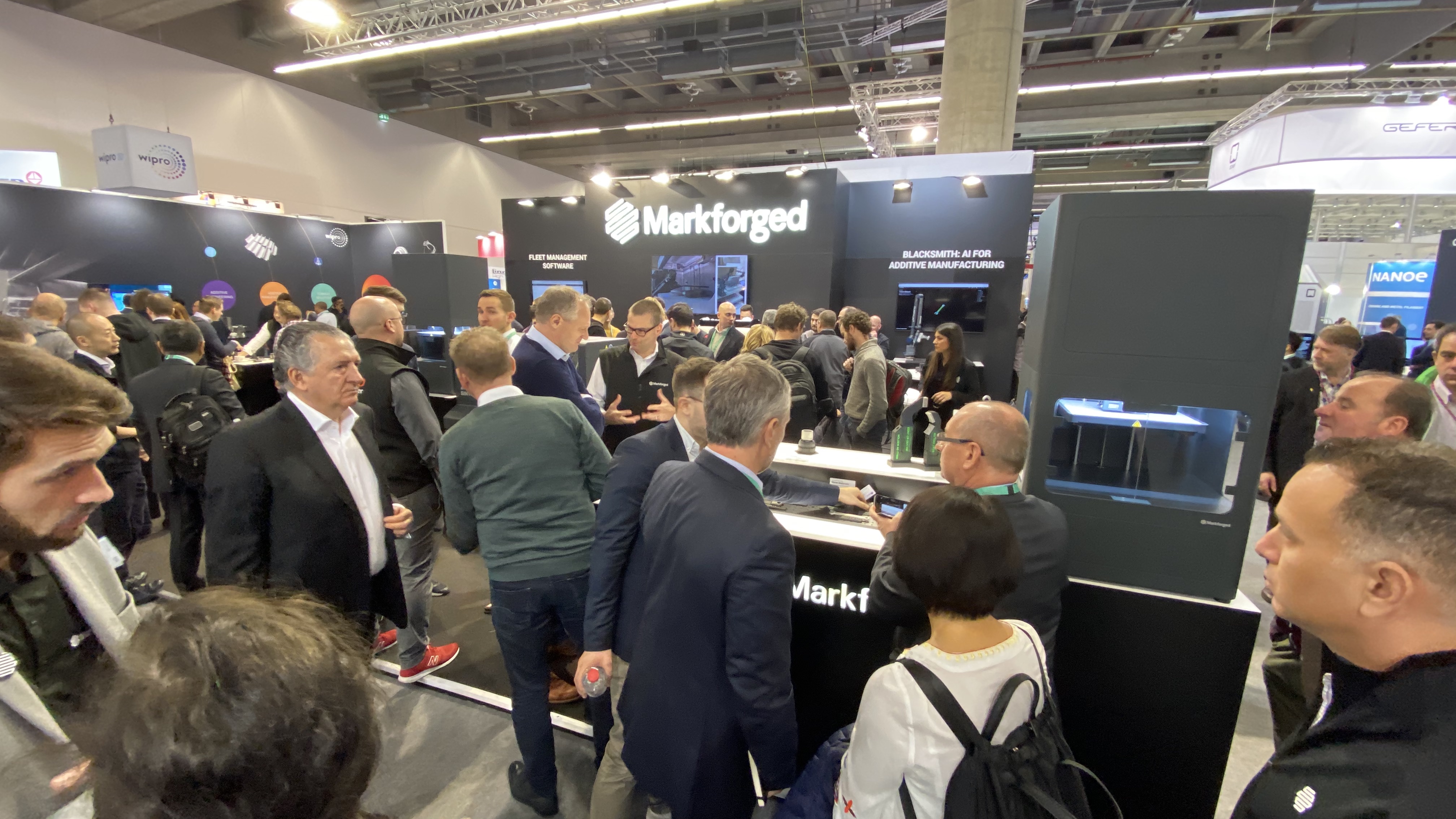 Busy days for Markforged in their Formnext booth.

At Formnext 2019, 3D Systems showcased its new, application-specific production solutions for the Healthcare, Aerospace, and Automotive industries. With its broad portfolio, the company now has the ability to architect solutions specific to customers’ needs, especially larger companies that have already undergone feasibility studies, and started using 3D printing for a variety of applications. The concept from 3D Systems aims at enabling scaled production, and improved overall total cost of operation.
On the material side, the company released a new material for their MJP 2500 Plus printer, called VisiJet M2S-HT90. It’s a new engineering-grade plastic for its MJP 2500 Plus printer. The transparent material is heat deflecting and ideal for functional prototyping as well as tools for injection moulding. 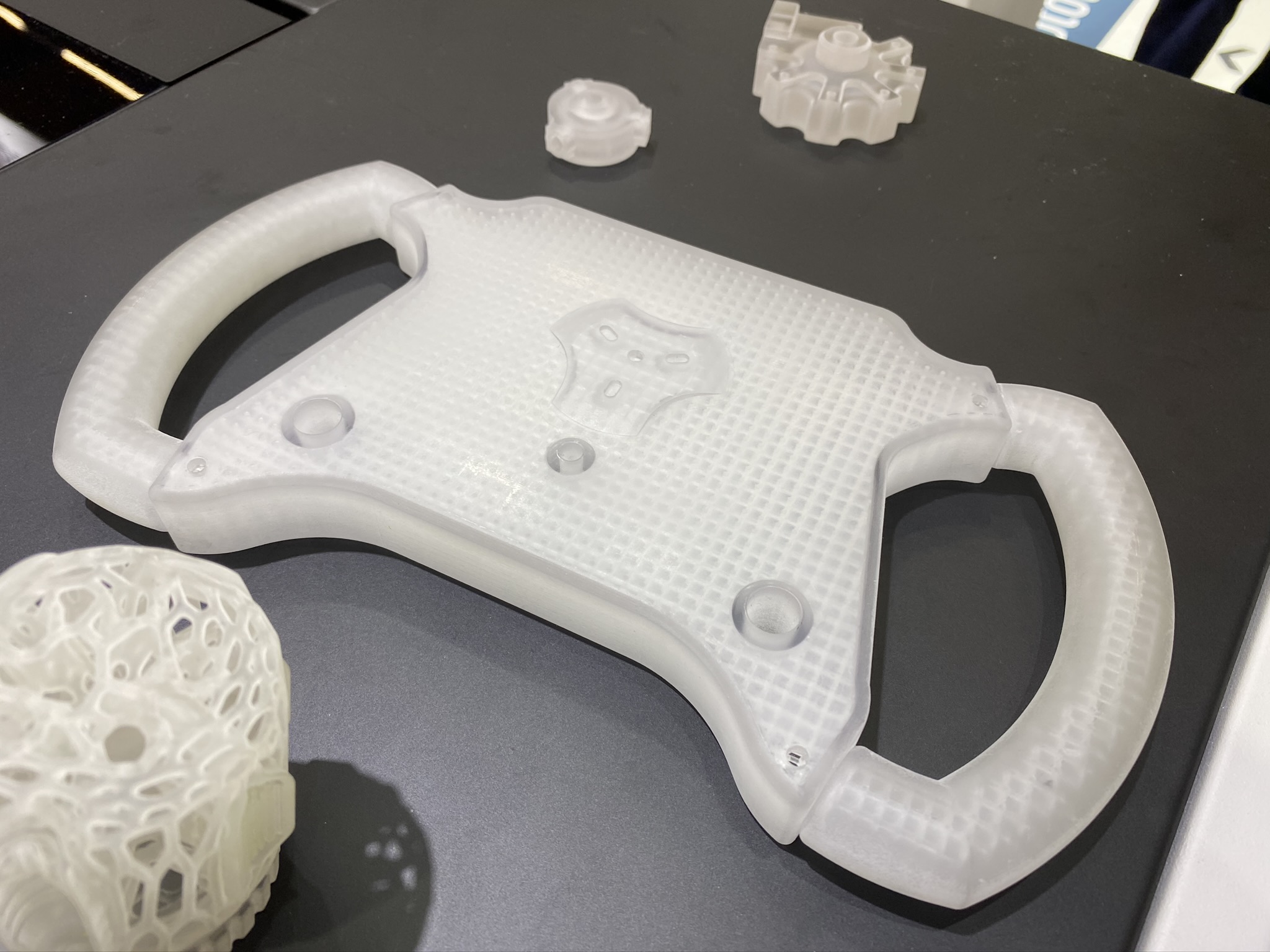 3D Systems released a new high temp material for their MJP 2500 Plus printer.

During 2019, HP rolled out two new printer platforms, the MJF 500 and the MJF 5200 , so no major hardware news announced at Formnext. Some of the news emanating from the German trade show is a new financing model, similar to what “2D printer” companies have been doing for years. The new model enables customers to buy a 3D printer as a subscription service, or as “pay-per-build”. The pay-per-build service applies to the printer models 5200, 4200 , and 500, and the subscription service for the 340 model, not yet on the market. 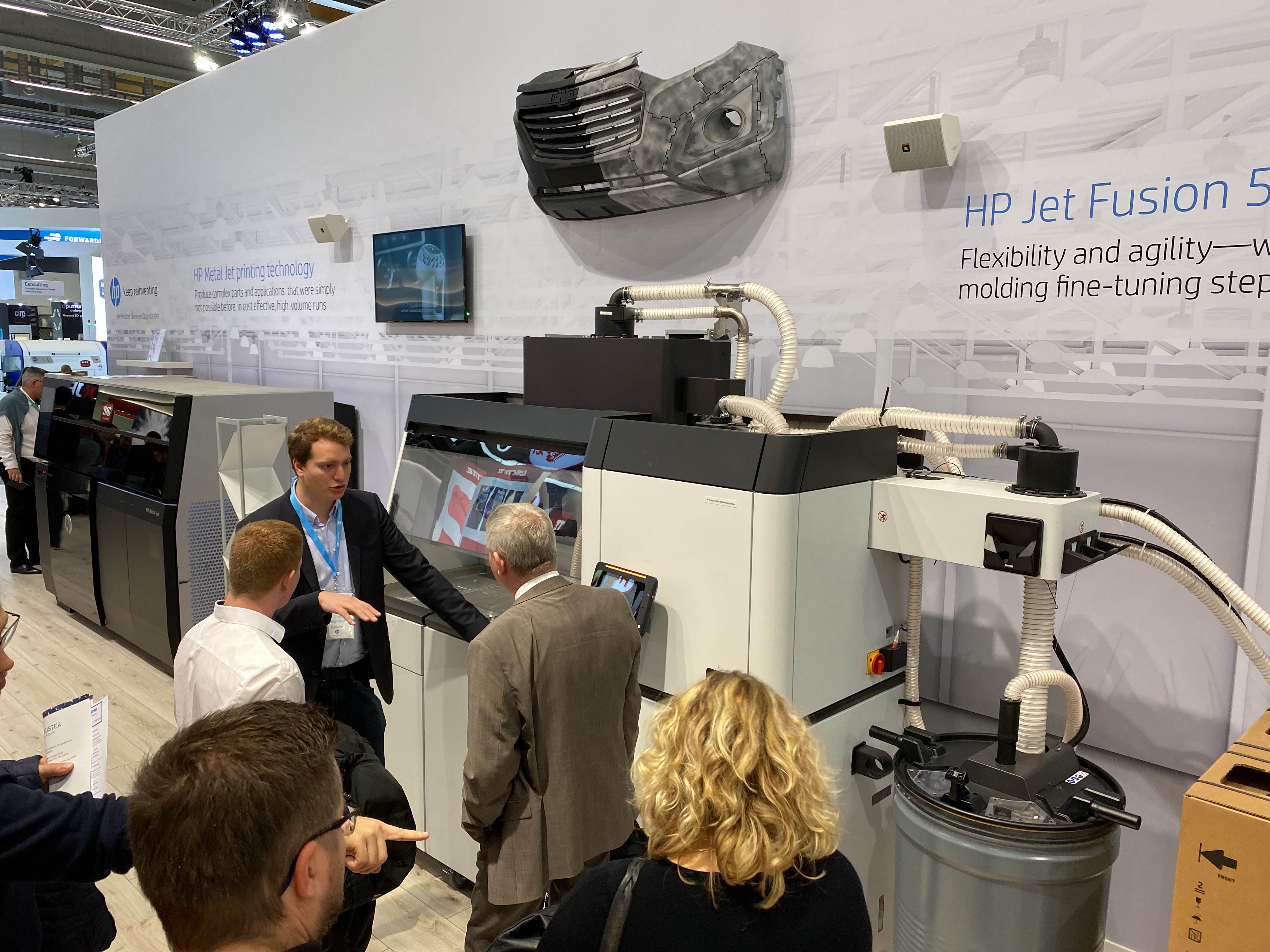 Here at PLM Group, we have been working with Materialise since the fall of 2019, and we are impressed with their 3D printing software tools Streamics and Magics. At Formnext 2019 Materialise announced a new release of Magics, the company’s software suite for data and build preparation and stl file repair.
The new version introduces several features to shorten the build preparation process. With industrial print factories operating in an increasingly cost-competitive environment, this allows them to raise output while reducing cost. In Magics 24 the nesting option has become faster, something that will reduce the build preparation process.

Get in touch with us

The key to the ten types of innovation

Business leaders agree — innovation is important, but it’s difficult to define. Vague definitions like “the process of innovating” or “making changes in something established, especially by introducin...

END_OF_DOCUMENT_TOKEN_TO_BE_REPLACED

PLM Group's production partner Prototal Industries is now investing in a new HP Jet Fusion 5210 at the unit in Swedish Jönköping. With the new installation, the company will also be the first service ...