To constrain a model the right way can be a challenge in simulation. You want a model without rigid body motion, but you do not want it to be too stiff. The 3-2-1- method is one way to help you solve this kind of problem and get a result with the expected deformations. I have created this step by step guide on how to stabilize your model in SOLIDWORKS Simulation.

But first some we will refresh our memory about “Degrees of Freedom” and all that it entails.

Some of you that use SOLDIWORKS Simulation have probably encountered the problem of the system being unstable.

According to you and the equilibrium diagram it should be in equilibrium, but Simulation is not interpreting it that way. To get a body in static equilibrium the sum of all the forces and the moments applied on the body must be zero.
However, sometimes small rigid body motion appears which makes the body unstable – it can move – and the result ends up being inaccurate.

I have created this Simulation tip step by step guide on How to stabilize your model.

The 3-2-1-method can help us solve this problem. In three steps we will constrain the different degrees of freedom to move.

The sum of all this is six – which is also the sum of the degrees of freedom acting on a static model. If we constrain them, we prevent the rigid body motion.

We use the model below to show the method. A material is applied on the body and two reversed forces on 1000 N each, the sum of the forces acting on the body is zero.

But when running the study, we get the message “the model is unstable”

You can do like this to solve the problem:

In the first point, all three translational degrees of freedom, x, y, z are constrained, but the point is  free to rotate as a “ball-and- socket”.

In the second point we constrain the two translational freedoms normal to the line we just “walked” along, the x- and z-direction.

In the third point, we constrain the translational freedom normal to the plane containing point, 1, 2 and 3.

This results in a model that is stable and constrained in all DOF and we only get the expected deformations. With this method we also reduce the risk of stress concentrations that can appear if you constrain your model too much. This is a simple method to use when you want so to simulate a self-balanced system.

Do you have any questions about SOLIDWORKS? Then don’t hesitate – reach out and we’ll help you. For more tips and tricks follow our YouTube channel. 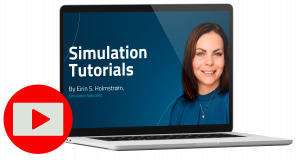 How to get SOLIDWORKS Simulation up and running?

Did you know that it is really easy to get SOLIDWORKS Simulation up and running? After you have bought the license there are just few steps to go through. STEP 1 – Simulation License Setup&nbsp...

END_OF_DOCUMENT_TOKEN_TO_BE_REPLACED

Markforged Simulation software takes the guesswork out of 3D printing

PLM Group’s partner Markforged announced the release of new Simulation features for its additive manufacturing software. Simulation is available as a free trial until April 2023, and the company expec...

END_OF_DOCUMENT_TOKEN_TO_BE_REPLACED

Optimize the shape of your design with topology and design studies

As a product designer you must take many factors into consideration when designing your product. Not only do you need to get the right design ready fast in order to minimize the delays and cost overruns associated with late-cycle performance and manufacturability issues. Designers also increasingly face the challenges of better understanding design behaviour and evaluating the most suitable manufacturing approach while they design.