OMotion is a growing company with a passion for unique, electric vehicles. In the summer of 2021, the plan is to launch a special vehicle in 20 copies on the market. To make this dream come true, the company recently completed its first year of SOLIDWORKS for Start-ups program, which made it possible to save both time and money.

As a child, Ola Svensson spent a lot of time in his relatives’ mechanical workshop and was always surrounded by vehicles of various kinds. Out of burning interest, he founded OMotion in 2013 – a company that initially focused on consulting in electronics and programming. In the following years, two people were hired by the company, Philip Jönsson, and Joakim Andersson, and together they decided to start a joint project in 2017.

“We had always been interested in vehicles and electronic drive systems, so it seemed natural to embark on an adventure in the automotive industry”, says Ola Svensson, CEO and founder of OMotion.

The plan was initially to develop a two-wheeled motorcycle, but after thorough market analysis, it became clear that it was something else they wanted to invest in: Three-wheeled motorcycles that look like a car.

“We stuck to it and started approaching the project from the software and electronics side. In 2017, we did an electrical conversion and now we are working on a completely new model that is designed from the ground up.”

Today, the company consists of seven employees, three full-time and four part-time, and the vision is to become a recognized manufacturer of lighter, electric sports vehicles. Even though it is a long journey to get there, according to Ola Svensson, the company’s first self-designed model is now rapidly approaching the market. This means that 20 vehicles, built in the company’s premises in the south of Sweden, will enter the market in the summer of 2021.

“We believe that the automotive industry will open up for a different way of transport. We are already seeing a development where electric traffic is invited into the cities.”

Lower costs in the starting blocks

Most vehicle components are self-designed, except for some of the most obvious ones such as engine and battery.

“When we went from working with electronics to making a complete solution for the entire vehicle, we felt that we needed a professional software to be able to handle it,” says Ola Svensson.

The solution was an application for SOLIDWORKS program for startups, where the company had free access to SOLIDWORKS for one whole year.

“SOLIDWORKS felt like a good alternative, it was what we had been recommended by others who work with mechanics and design in the industry. It is a recognized and good tool, so we decided to go for it.”

It was also financially advantageous for a company in the starting blocks. The following year OMotion got a discount on the 3DEXPERIENCE Works applications, which included everything the company needs to continue thriving – including 3D CAD, simulation, visualization and much more. Should they ever need support, they are also eligible for design guidance from SOLIDWORKS Engineers and have access to an array of online training materials.

3 key benefits with SOLIDWORKS for Start-ups

OMotion has seen the following main advantages with using SOLIDWORKS for Start-ups:

“I would definitely recommend it to others. Especially since you can use the programs for a whole year for free. Then you really have a chance to get started without incurring large costs in the beginning.”

It’s a process to design, and a process to make it fit. Everything down to the smallest screw should be accounted for in the design. One tool that played a crucial role for OMotion is SOLIDWORKS Simulation.

“We have SOLIDWORKS Premium now and mainly we have used 3D CAD and Simulation”, says Ola Svensson and continues: “Once we have drawn the frame and swingarm for the rear wheel, we have been able to simulate this directly in SOLIDWORKS to validate the design and guarantee durability and safety.”

One of the many functions that have been essential is load simulation to rotate the entire frame in two points and measure the torsional rigidity of the frame.

“Without such a competent program, we would not have managed what we have done now – it fills a fundamental need. We like to test manually, but it saves an incredible amount to not have to do it a hundred times. You see immediately if something does not fit together or needs to be changed. ”

Performing static simulations has improved the possibilities for the company to have an iterative and smooth design process, which at the same time ensures safety when the vehicles need road-testing.

“It’s serious stuff. If you want to test drive at 100 kilometers per hour, you have to make sure that it works. ” 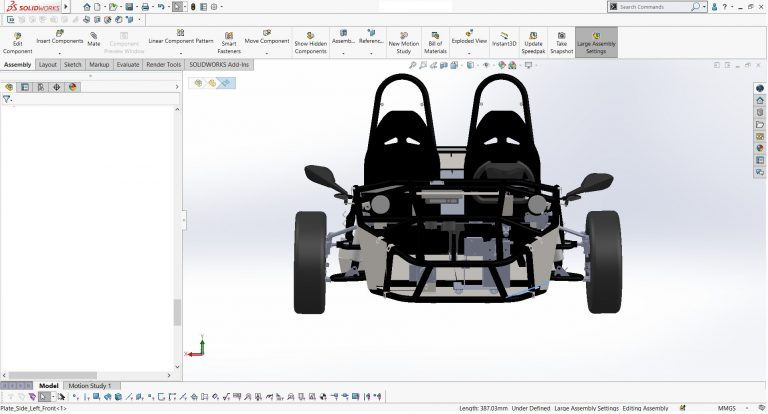 Expert help when in need of support

The collaboration with PLM Group, which provided the licenses, has worked very well according to Ola:

“We got help getting started with all the licenses. The collaboration with PLM Group has worked very well all the way. If something went wrong, we got the help we needed.”

After the first year with SOLIDWORKS, OMotion has chosen to continue working with the programs. The plan going forward is to continue designing the programs and continue launching new and exciting models in the future. SOLIDWORKS Electrical 3D is a program they look forward to testing.

“Now the focus is on getting the vehicles out, making sure everything works, and supporting customers. Then we want to enter new markets. In the long term, we intend to make a new model with a roof that we have already designed, and which would provide other opportunities to enter and take part in the small car market, which is even larger” says Ola Svensson and ends with:

“In order to grow the business, we need the SOLIDWORKS applications, as they are a crucial part of designing our products”.

We at PLM Group are proud to be involved and support OMotion in their journey to develop inspiring, electric vehicles for the future.

Are you curious to find out what SOLIDWORKS could do for your company?

Read more about SOLIDWORKS for Start-ups or participate in our webinar about Virtual Testing.

PLM Group, together with our partners HP and PostNord is hosting a full-day event on HP´s groundbreaking Multi Jet Fusion (MJF) technology in Stockholm on April 5. Before the event, we caught up with PostNord Strålfors Head of 3D...

END_OF_DOCUMENT_TOKEN_TO_BE_REPLACED

Q&A - 20 Things Worth Knowing about PDM on Cloud

3DEXPERIENCE is an efficient and user-friendly way of managing all of your CAD related data. In the webinar on the 22nd of February, 2022 - Anders Wentzel and Christoffer Stokkebor gave a comprehensiv...

END_OF_DOCUMENT_TOKEN_TO_BE_REPLACED

Supply chain, collaboration and sustainability – these are some of the keywords when PLM Group sums up the top 3D print trends for 2022. Have a read to see what else is in the crystal ball. ...