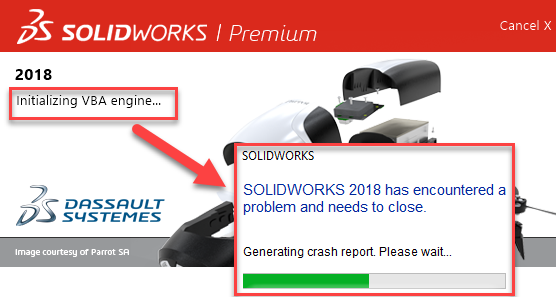 Windows 1809 update has been released a while ago, and it has brought some difficulties for some SOLIDWORKS users. There are some cases where after the installation of Windows 1809 version SOLIDWORKS does not start properly. Instead, it crashes in the restart phase called “Initializing VBA Engine”.

The issue is related to Microsoft VBA components that also SOLIDWORKS utilizes, for example in Toolbox, macro and equation functions.

How to use SOLIDWORKS with Windows 1809 update:

If you have already installed the Windows 1809 update, the problem is fixed with uninstalling the VBA component called VBA 7.1.

Right-click on the vba71.msi and choose “Uninstall”.

SOLIDWORKS is aware of this issue (SPR 1114376) and they are working with finding a permanent fix. END_OF_DOCUMENT_TOKEN_TO_BE_REPLACED

Watch our special video Christmas Greeting 2021. PLM Group wishes you a Merry Christmas as well as health, happiness and prosperity for 2022.

END_OF_DOCUMENT_TOKEN_TO_BE_REPLACED

Markforged has announced the addition of Smooth TPU 95A to its growing portfolio of materials. The new, rubber-like material provides manufacturers with an efficient way to easily and reliably make high-quality, flexible...